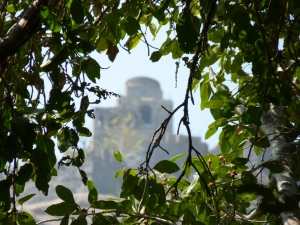 This is the third and last part of our series, with this we conclude the first chapter of the book we started in part 2.

HISTORY AND CULTURE OF INDIA: A NEW APPROACH

CHAPTER I: THE STUDY OF HISTORY

WHAT IS THE RELATION BETWEEN EXTERNAL EVENTS AND THE PSYCHOLOGICAL STATE?

One of the key points we emphasise in this book is the interrelationship of the inner and outer worlds of man; in other words, does the psychological condition of man influence and affect his outer behaviour and circumstances or is it the external conditions and circumstances that determine his life? We shall try to show in this book that though man is a material being and is affected by his material environment, he is essentially a mind and at a more evolved stage a spiritual being.

Let us look at a few examples of events in history where the influences of the idea and thought-power have contributed greatly to the external events. One such example has been the French Revolution. It is generally understood that the French Revolution came about mainly because of political and economic reasons; there is certainly no doubt that the poverty and the food shortages played an important part; similarly the political system based on the total domination of the upper classes contributed greatly to the onset of the revolution. But it cannot be denied that the intellectuals of France also played a very important role in awakening the people.  There can be no doubt that the writings of Rousseau and Voltaire and other writers and intellectuals made all the difference; for in the other countries of Europe the political and economic conditions were even worse. It was really the ideas of the intellectuals that shaped the course of events.

Similarly, it was due to the writings of Karl Marx and Engels that over a century later the Russian revolution took place.  The power of the idea plays a very important part in the historical evolution of man.

WHAT IS THE ROLE OF THE INDIVIDUAL?

The most striking examples of individuals shaping the destiny of a nation are very evident in recent times. France was profoundly influenced by Napoleon, the influence of Hitler on Germany cannot be underestimated nor the profound effect that Churchill had on the course of English history.  In  India,  in recent  times the personality of Gandhi gave a distinct stamp  to Indian  politics;  and  all these movements  were  possible only because at their centre there was an individual with  some  outstanding  and  exceptional  qualities. This is not to deny the importance of the collectivity, but only to point out that the human individual plays a great role and sometimes even the most important one in human evolution. As a matter of fact, some historians conceive of history as a mass of biographies. Without completely agreeing with this viewpoint, we should be able to appreciate the value of the individual in human progress.

WHAT IS THE AIM OF LIFE AND HOW CAN HISTORY HELP US FIND IT?

This is the last but most important question to be explored here in this brief discussion. We start with a firm belief that life has a purpose and that human life has a goal, and that this goal is   fulfilled by an evolutionary process. At the present moment  man represents  the  mental stage of evolution; by this alone  he  is different  and superior to the animal, but this too will have  to be  surpassed  and man has to attain to a greater level of consciousness and perfection. The aim and destiny of human life will thus be first to develop his mind and then go beyond to a greater perfection beyond mind.

How can history help us in this pursuit?

It may be said that all study, or at least the major part of what we study consists in analysing the past. It is the same with history too; but we need to take great care that we do not stick to the past.

It will be our aim in this book to show that all that has happened in the past has only helped to prepare the present and in the same way the present is preparing the future. With the past as our bedrock and the present as the springboard, we must prepare to leap into the future. Viewed from this point, the study of history can be of great value.

Prof Kittu Reddy was born in the Anantapur district of Andhra Pradesh in 1936. He is the nephew of Late Sanjiva Reddy, the former President of India.

At the young age of 5 he was taken to the Sri Aurobindo Ashram, Pondicherry by his parents. Brought up in the spiritual ambiance of the Ashram, he has lived there ever since. He had all his education at the Sri Aurobindo International Centre of Education from where he graduated in 1957. In 1958, he started teaching at the same Centre, first at the school level and later from 1969 at the college level. He teaches courses on Indian Culture, Political Science, Social Science, and History in the light and vision of Sri Aurobindo. He was also in the administration of the Sri Aurobindo International Centre of Education from 1958 to 1976.

In 1987, he came in contact with the Indian Army. Since then he has conducted numerous workshops for the Indian Army, Navy and Air Force. These workshops deal with Motivation, Leadership, Ethics, and the Indian nation. They have been held both in Pondicherry and at various training centres of the Armed Forces.

In 1994, at the request of General BC Joshi, then Chief of Army Staff, he moved over to Delhi for two years as Adviser to the Army Welfare Education Society. He also wrote capsules for the training institutions of the Army from the induction stage till the rank of senior officers with the intention of introducing spirituality as a motivating factor. He worked closely with the Army Schools and is a founding member of the Academic Advisory Council of AWES.

Prof Reddy also worked closely with General Shankar Roy Chowdhury when he was the Chief of the Indian Army. He has also written a book for the Army, titled “Bravest of the Brave” and two monographs, “Kargil – the manifestation of a deeper problem” and “Secularism, Religion and Spirituality”.

In 1995 he addressed the Royal College of Defence Studies in England. In 2006, he visited Sweden and gave a few talks at the Indo-Swedish Association and at the National Defence College in Stockholm. In the last few years Prof. Reddy has been giving talks at various educational institutions in India, on various topics related to Indian Society, Indian Education and Culture, Stress Management, and World Unity.

Radha's consciousness. Perfect attachment to the Divine.
19th January. I am reminded of a review I had written of this deeply moving book a couple of years back. I don't read much fiction but this one hardly feels like fiction. Or if it does at places, it is meant to remind the reader that truth can indeed be much harsher than fiction.
True courage
"the attitude of the fighter who, as representative of something very great, could not allow himself to be put down or belittled." (Sri Aurobindo on Swami Vivekananda)
New video on our channel. Temples of Goa - part 2. We zoom in on one of the most famous temples of Goa - Shri Manguesh Devasthan also known as Mangeshi Temple.
Prakriti to Shakti
"Neither Nature nor Destiny nor the Divine work in the mental way or by the law of the mind or according to its standards—that is why even to the scientist and the philosopher Nature, Destiny, the way of the Divine all seem a mystery." (Sri Aurobindo, CWSA, 32: 352)
Let Beauty be Your Constant Ideal
#newyear #newyear2023 #sriaurobibdoandthemother #sriaurobindo #divinemother #srimaa #sriaurobindoashrampondicherry #sriaurobindoashram #theMotherQuotes #Pondicherry
#shiva #nataraja #sriaurobindo #cosmic #mahadev🙏 #sanatanadharma #Hinduism #cosmicdance #cosmicdancer #tandava
Uncluttered simplicity.
"A stone can represent divine power, and it can also be just the visual representation of a stone! So the question of finding the immense power of symbolism in Indian culture is one thing. To be dedicated to it in a romantic way, is entirely a different thing. Now it depends on who the artists are that are working in this direction, and what they are trying to show." (S H Raza)
MAHAKALI Power of The Mother
On Sri Aurobindo's Mahasamadhi
A 270 degree projection representing various schools of miniature painting. Two key themes represented are Ramayana and Ragachitra. From the vast collection of miniatures at National Museum, New Delhi.
An offering for November 24, Siddhi Divas, which marks the anniversary of the Day of Victory, the day of the descent of Sri Krishna Consciousness or the Overmental Consciousness into the physical, which happened in the year 1926.
God by Sri Aurobindo
Watch: Sri Aurobindo on the Significance of Ramayana - https://www.youtube.com/watch?v=JOuxA52tyLo