“…everyone who has at all the Indian spirit and feeling, can at least give some account of the main, the central things which constitute for him the appeal of Indian painting, sculpture and architecture.” (Sri Aurobindo, CWSA 20: 261)

Aihole, a village in Karnataka, was once the playground of the architects, sculptors and engineers, conducting research, innovating and advancing the state of knowledge of constructing temples as abodes of Gods. The chief patrons of these artists — the Chalukya Kings of Badami had indeed created this region of Aihole-Badami-Pattadakal as the cradle of temple architecture.

In Part 1 we focused on the Durgadagudi (Durga Temple), which is certainly a great illustration of the innovation in temple architecture and sculptural art. In this part we explore some of the other temples in the same complex which houses over a dozen structures.

Walking through this temple complex, presently maintained by Archaeological Survey of India, one can clearly see the ravages of time. In addition to the destruction caused by the attacks by invading armies, we also witness the impact of neglect, vandalism, wear and tear over time, faulty repair work, etc. The absence of principal deity in the garbhagriha at several temples, and particularly the larger Durga temple, is a stark reminder that these temples which were once the abodes of gods, now stand primarily as illustrations of the great architectural marvels our ancestors were able to create. No worship is offered at any of these temples.

As the above layout shows, there are some ‘nameless’ temples in the Aihole complex; they are either nameless because the absence of the deity in the garbhagriha has made it difficult to identify them. Or they were perhaps built only as ‘experiments’.

After the Durga temple, this is the second largest temple in the complex. It was earlier believed to be the oldest temple built in 450 CE, though later studies date this temple to seventh century.

As mentioned earlier almost all the temples in this complex are part of the great experimentation happening in temple architecture at the time. Ladkhan temple (situated on the south of the Durga temple, #1 in the Temple Complex picture above) stands out as one of the prime examples of a significant innovation in temple geometry and the associated evolution of the Chalukyan style of architecture.

The front of this Shiva temple has a distinctive plan, in the sense that it looks more like a mandapa with rows of pillars. This architectural design known as the Panchayatana style indicates an early experiment in Hindu temple construction. It is believed that Pulakesin II was coronated in the large pillared hall of this temple.

An outstanding feature of this temple is that it starts off as a rectangular structure but ends up as a square. A small garbhagriha is seen at the rear end of a square sabhamandapa which one arrives at from a rectangular mukhamandapa. There is no pradakshinapatha in this temple.

Also, though built in sandstone, the temple with its steep roof emulates the look of a structure made with wooden logs. This use of wooden construction design as a template for construction of the grand structure in stone can also be seen at Chennakesava temple during the Hoysala period.

Interestingly, the back portion of the temple is a square in two tiers having a slight slope in all the four directions. On the roof are placed stone rafters to give the appearance of the wooden roof. The front mukhamandapa which is rectangular also has similar roof design.

Other architectural features which make this temple unique include an upper level smaller garbhagriha, which is nested above the center of the sabhamandapa and opens to the east with pillars and pilasters though without any shikhara (probably it used to be there at some point). On three sides of the upper level garbhagriha are sculptures of Vishnu, Surya and Ardhanarishvara.

The front courtyard of the Ladkhan temple has a set of stone stairs which connects the lower level main garbhagriha to the one on second floor. This access way is however now closed. The pillars in this front mandapa are highly decorative.

The temple embeds three concentric squares facing the garbhagriha with a Shivalinga. Inside the inner third square is a seated Nandi. 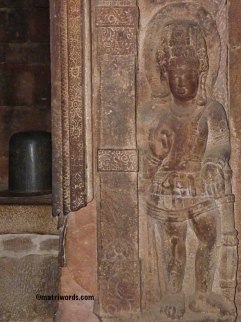 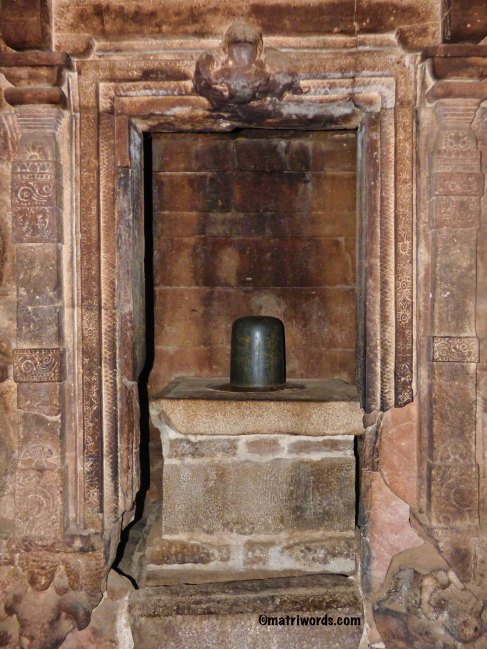 The two square mandapas create the sabhamandapa or community hall of the temple. The second concentric square is supported by a set of 12 intricately carved pillars. These are rectangular pillars, here we do not see cylindrical pillars which might have evolved at a later time. Floral designs are seen on the ceilings and walls. 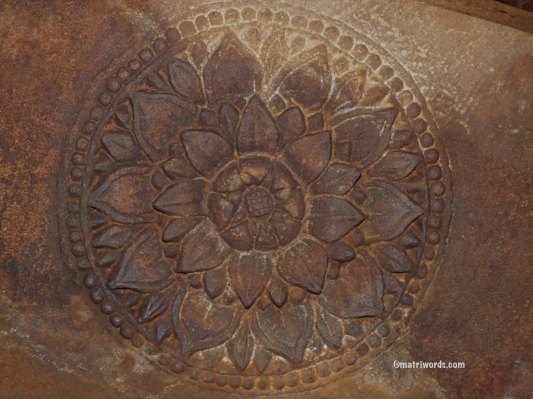 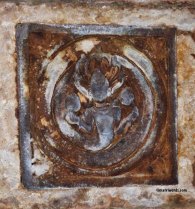 The temple is lit with natural sunlight coming in from lattice windows, often seen in the architectural styles common in northern India. These lattice windows on three sides of the temple also provide good ventilation.

Walking through the temple one sees a large number of eye-catching sculptures on the pillars and in the niches, including various amorous couples.

How did this temple come to be known as Ladkhan temple? It is believed by some that the temple was named so because during the times when the region was facing numerous attacks at the hands of Bahmani and Deccan Sultans, a Muslim general named Ladkhan had used this temple as his residence.

But it is rather hard to believe that a Muslim officer in those times would have lived in this temple without his religious sensibilities of ‘no idolatory’ getting offended in presence of all the divine carvings. Furthermore, while breaking of idols was something most Muslim attackers carried on with great zeal, would Ladkhan would have spared the Shivalingam and other divine sculptures in this temple? One wonders.

Others believe that over a period of time as many of the temples in the large complex at Aihole stopped serving as living temples due to various reasons, many of these structures were at some point were occupied by different people. Sometime in the early 20th century, perhaps around 1920, some British archaeologists who were documenting these temples randomly named them after the individuals who were believed to have occupied them.

Regardless of the mystery surrounding the name of this temple, it remains as a marvelous exemplar of innovation in Hindu temple architecture.

Believed to be one of the oldest temples in Karnataka, Gaudara Gudi is named so because the village’s Gauda (or Gowda) resided here. It is the third largest temple (after Durgadagudi and Ladkhan temple) in this complex.

As per a two-line Kannada inscription found on the temple’s Navaranga this temple was named Durga Bhagavati Devalaya. It also mentions that 500 mahajans of Aihole and 120 rulers from eight towns had donated land for this temple. This 64-pillared Devalaya while being simple in design has a royal feel. The shikhara of the temple, like several others in the complex, is missing.

Nadyar Gudi was perhaps an experiment in Trikutachala style of temple architecture with three shrines. However, only one Dravida style vimāna can be seen today. Some parts of the temple are badly damaged. The sandstone roof is sculptured to give a look of wooden logs, something seen in several other temples in this complex. This style of architecture is also found at several later temples built during the Hoysala period.

Inside the temple we see cylindrical ornate pillars, again an illustration of a technique perfected later during the Hoysala times. Who can forget, once seen, the highly ornate and polished pillars at Chennakesava temple at Belur!

As indicated by the name, this temple built during 7th or 8th century was dedicated to Surya, the Sun God. Constructed in Rekhanagara style with curvilinear tower, the temple consists of a small mandapa with four pillars, rangamandapa with four tall pillars and 12 half-pillars leading to the garbhagriha.

Next to the Suryanarayana temple stand two smaller temples. Absence of the main deity’s mūrti makes it difficult to give a name to this twin structure.

Built in the 9th century, this temple though simple in design is known for its 20 sculptures of amorous couples engraved on the door frame of the garbhagriha. On the top of the door frame, there is also a prominent sculpture of Garuda holding two snakes. The temple is named so because of the shape of the amalaka atop its Rekhanagara style of shikhara. 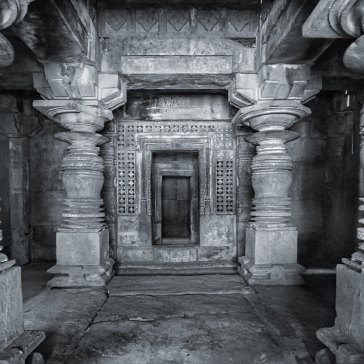 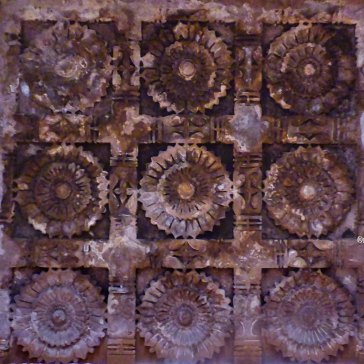 The name literally means carpenter’s temple. It came to be known so because a carpenter’s family was residing here when the Archaeological Survey took over the premises for preservation and maintenance. This 9th century temple with three distinct areas – mukhamandapa, rangamandapa and garbhagriha – is believed to have been a temple for Lord Surya.

As per the traditional wisdom, a source of water was always ensured wherever a temple was constructed. This source could be a river, a pond or a well. Aihole being situated on the right bank of river Malaprabha had only a few wells in the village. Two reservoirs or kalyani-s were built in the temple complex to ensure water supply for the temples.

The kalyani opposite Badiger temple is larger than the one near Durga temple. Water stains on the walls of these tanks clearly indicate dipping water-table over time.

Walking through this temple complex, going from one temple to the next, one can’t help but marvel at the amazing creative genius and innovative spirit of the architects, engineers, and sculptors who walked and worked in this land called Bharat. The experimentation that happened at Aihole is perhaps unmatched anywhere in the world.

“The long tradition of her architecture, sculpture and painting speaks for itself, even in what survives after all the ruin of stormy centuries: whatever judgment may be formed of it by the narrower school of Western aesthetics,— and at least its fineness of execution and workmanship cannot be denied, nor the power with which it renders the Indian mind,—it testifies at least to a continuous creative activity. And creation is proof of life and great creation of greatness of life.” (Sri Aurobindo, CWSA 20: 243, emphasis added)

Have you seen Part 1?

Of Mediocrity, Beauty and Ugliness