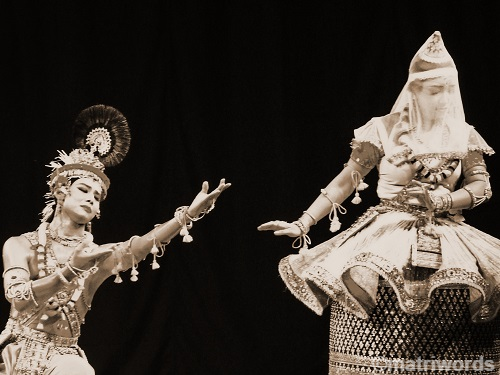 Manipuri dance, one of the Indian classical dance forms, named after the region of its origin – Manipur, a state in northeastern India, is particularly known for its Hindu Vaishnava themes, and exquisite performances of Raslila, love-inspired dance drama of Radha-Krishna. Like all classical Indian dances it traces its roots in the ancient Hindu Sanskrit text Natya Shastra, but with influences from the culture fusion between India and southeast Asia. As is the case with most Indian performing arts Manipuri dance aims to express the deeper spiritual values.

The Manipuri dance drama is marked by a graceful, fluid, sinuous performance with greater emphasis on hand and upper body gestures. It is accompanied with sankirtan, devotional music created with many instruments, with the beat set by cymbals (kartal or manjira) and double-headed drum (pung or Manipuri mrdanga). The unique costumes and aesthetics make this dance a delight for the audience.

As per the tradition of the Manipuri people in the Himalayan foothills and valleys connecting India to Burma, they are the Gandharvas (celestial musicians and dancers) in the ancient Hindu texts. Historic texts of Manipuri people calls the region as Gandharva-desa. The Mahabharata mentions Manipur where Arjuna meets and falls in love with Chitrangada. The Vedic Usha, the goddess of the dawn, is a cultural motif for Manipuri women, and in the Indian tradition, it was Usha who created and taught the art of feminine dance to girls. This oral tradition of women’s dance is celebrated as Chingkheirol in the Manipuri tradition. (Wikipedia)

For this month’s photo-feature we are happy to showcase some pictures taken at a Manipuri dance performance at Auroville. This was a SPICMACAY event, an organisation aimed at promoting the appreciation of Indian classical music, art and culture among the youth. All photographs by Suhas Mehra. Introductory text and selection of quotes by Beloo Mehra.

The words of the Mother and Sri Aurobindo are offered here as aids for the readers to meditate and contemplate upon ALL that is Sri Krishna.

Krishna represents both the universal Godhead and the immanent Godhead, he whom one can meet within one’s being and in all that constitutes the manifested world. (The Mother,  Words of the Mother – III, CWM, Vol. 15, p. 14)

Radha is the personification of the absolute love for the Divine, total and integral in all parts of the being from the highest spiritual to the physical, bringing the absolute self-giving and total consecration of all the being and calling down into the body and the most material Nature the supreme Ananda. (Sri Aurobindo, Letters on Yoga-II, CWSA, Vol. 29, p. 494)

Krishna is the immanent Divine, the Divine Presence in everyone and in all things. He is also, sovereignly, the aspect of Delight and Love of the Supreme; he is the smiling tenderness and the playful gaiety; he is at once the player, the play and all his playmates. And as both the game and its results are wholly known, conceived, willed, organised and played consciously in their entirety, there can be room for nothing but the delight of the play. Thus to see Krishna means to find the inner Godhead, to play with Krishna means to be identified with the inner Godhead and to share in his consciousness. When you achieve this state, you enter immediately into the bliss of the divine play; and the more complete the identification, the more perfect the state. (The Mother, On Thoughts and Aphorisms, CWM, Vol. 10, p. 51)

Some say Krishna never lived, he is a myth. They mean on earth; for if Brindavan existed nowhere, the Bhagavat could not have been written. (Sri Aurobindo, Aphorisms, #37, CWSA, Vol. 12, p. 427)

Question asked to the Mother: Does Brindavan exist anywhere else than on earth?

The Mother: The whole earth and everything it contains is a kind of concentration, a condensation of something which exists in other worlds invisible to the material eye. Each thing manifested here has its principle, idea or essence somewhere in the subtler regions. This is an indispensable condition for the manifestation. And the importance of the manifestation will always depend on the origin of the thing manifested.

In the world of the gods there is an ideal and harmonious Brindavan of which the earthly Brindavan is but a deformation and a caricature.

Those who are developed inwardly, either in their senses or in their minds, perceive these realities which are invisible (to the ordinary man) and receive their inspiration from them.

So the writer or writers of the Bhagavat were certainly in contact with a whole inner world that is well and truly real and existent, where they saw and experienced everything they have described or revealed.

Whether Krishna existed or not in a human form, living on earth, is only of very secondary importance (except perhaps from an exclusively historical point of view), for Krishna is a real, living and active being; and his influence has been one of the great factors in the progress and transformation of the earth. (On Thoughts and Aphorisms, CWM, Vol. 10, pp. 60-61) 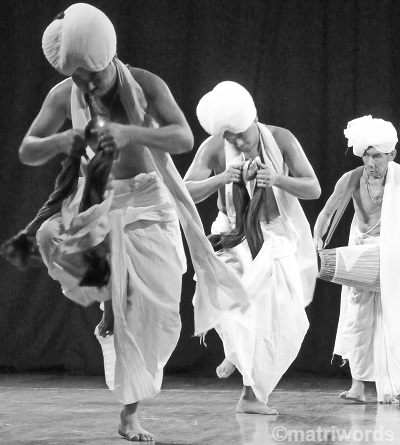 God has so arranged life that the world is the soul’s husband; Krishna its divine paramour. We owe a debt of service to the world and are bound to it by a law, a compelling opinion, and a common experience of pain and pleasure, but our heart’s worship and our free and secret joy are for our Lover. (Sri Aurobindo, Aphorism # 463, CWSA, Vol. 12, p. 487)

The Gopis are not ordinary people in the proper sense of the word—they are extraordinary by their extremeness of love, passionate devotion, unreserved self-giving. Whoever has that, however humble his position in other respects, learning, external sanctity etc. etc., can easily follow after Krishna and reach him; that seems to me the sense of the symbol of the Gopis. There are many other significances, of course—that is only one among the many. (Sri Aurobindo, Letters on Yoga-II, CWSA Vol. 29, p. 493)

He who recognises not Krishna, the God in man, knows not God entirely; he who knows Krishna only, knows not even Krishna. Yet is the opposite truth also wholly true that if thou canst see all God in a little pale unsightly and scentless flower, then hast thou hold of His supreme reality. (Sri Aurobindo, Aphorism # 159, CWSA, Vol. 12, p. 443)

10 thoughts on “Krishna-Radha in Manipur”

Hymn to Durga by Sri Aurobindo
A Tree' is a beautiful short poem written by Sri Aurobindo sometime between 1900-1906. It speaks of the eternal human condition -- bound to earth yet seeking for skies above...
Let us visit a highly unique temple in Goa. Devaki Krishna Ravalnath temple, located at Marcel in Goa, is said to be the only temple in India where Krishna is worshipped with his birth mother Devaki. Read about it here: https://matriwords.com/2020/08/11/devaki-and-krishna-in-goa/
Watch our latest video 'The One Self (a sonnet by Sri Aurobindo)
Three flower stories...
Watch our video: https://www.youtube.com/watch?v=JOuxA52tyLo
“[Rāma’s] business was to destroy Ravana and to establish the Ramarajya – in other words, to fix for the future the possibility of an order proper to the sattwic civilised human being who governs his life by the reason, the finer emotions, morality, or at least moral ideals, such as truth, obedience, co-operation and harmony, the sense of domestic and public order, – to establish this in a world still occupied by anarchic forces, the Animal mind and the powers of the vital Ego making its own satisfaction the rule of life, in other words, the Vanara and Rakshasa. . . .
Today is 112th anniversary of Sri Aurobindo's arrival in Pondicherry.
At Shankar Chetty's house, today. This was Sri Aurobindo's first residence in Pondicherry when he arrived on April 4, 1910.
Avoid useless talking. Also useless talking on social media.
Goa beyond the beaches, parties and churches! The new matriwords video, Temples of Goa - a brief look, is a humble attempt to tell the story of most of the Hindu temples we visited in Goa. It is dedicated to the brave Hindus who risked their lives to save their gods during the 400+ year Portuguese colonial rule from 1510 onwards which was a brutal period for Hindus of that region.
"The power that governs the world is at least as wise as you and it is not absolutely necessary that you should be consulted or indulged in its management; God is seeing to it." (Sri Aurobindo, CWSA, 13: 79)
The ego thinks of what it wants and has not. This is its constant preoccupation. The soul is aware of what it is given and lives in endless gratitude.
"Art can express eternal truth, it is not limited to the expression of form and appearance. So wonderfully has God made the world that a man using a simple combination of lines, an unpretentious harmony of colours, can raise this apparently insignificant medium to suggest absolute and profound truths with a perfection which language labours with difficulty to reach. What Nature is, what God is, what man is can be triumphantly revealed in stone or on canvas."
Open to Her Force....
A humble offering on the Mother's 144th birthday
Memories...
The word for the road!