(Photos by Suhas Mehra, text by Suhas and Beloo Mehra)

A little walk from behind the Hazara Rama temple brings you to the great Royal Quarters of the mighty Vijayanagara Emperors who ruled from Hampi. A visit to Hampi would not be complete without spending some time appreciating the few surviving splendid architectural marvels in this royal enclosure.

First, let us walk toward the famous Kamal Mahal or Chitrangani Mahal, or more commonly known as Lotus Mahal.

The magnificent Chitrangani Mahal owes its present day popular name “Lotus Mahal” to the Britishers. This place is also referred to as the pleasure pavilion or zenana quarters (ladies’ quarters) where the Queens and other royal ladies spent their leisure time in pleasant pursuits. Interestingly, one part of this mahal was also used by the Emperor for meeting with his closest aides. This is why the first map of the site prepared in 1799 showed this structure as the “council chamber.”

Lotus Mahal is one of the few courtly structures which survived the mayhem caused by the Deccan Sultans. It is situated inside a high walled compound which has watchtowers with balconies built into the compound wall. A road from the mahal leads directly to the royal elephant stables, so it is likely that this palatial building generally thought of as ladies’ quarter was at least equally used by the gentlemen of the royalty.

The two-storied building has a symmetric layout, with equal projections on four sides. The beautiful plaster designs on the curved archways throughout the building are showstoppers. These archways and the balcony on the first floor with the domed construction give the building a resemblance of a half opened lotus bud.

Eight pyramidal towers rise over the central and corner bays of the building; a ninth tower above the central bay is similar but higher. The staircase tower in one corner is a later addition. Continuously running sloping eaves or overhangs surround both the stories of the building, protecting it from the sun and rain.

While the building itself is made of brick and stucco, the high and ornamental platform on which it is raised is made of stone. The ground floor has an open pavilion or a spectator section; it is believed that this space was used by the royals for congregation and leisurely activities. The first floor is a closed pavilion with many rectangular windows topped by curved arches. This portion is believed to have been primarily used by the royal ladies.

The mahal was built in such a way that it naturally remained cool during the summers. It had an internal duct work through which flowed a stream of water keeping the building cool. But the source of water and its connectivity to the building remains somewhat of a mystery.

“…the Indian mind is not only spiritual and ethical, but intellectual and artistic, and both the rule of the intellect and the rhythm of beauty are hostile to the spirit of
chaos.” (Sri Aurobindo, CWSA, 20: 12)

Kamal Mahal or Lotus Mahal is one of the prime examples of the Indo-Islamic architecture which began to grow around 11th century CE.  We see here a fusion of Indian temple architectural elements with some aspects of the Islamic royal structures. The beautiful roof of the mahal contains nine superstructures, which resemble the shikhara of a temple. The lobed or cusped arches and plaster designs reflect the influence of the Islamic architectural elements.

“It seems to me that here [in Indo-Islamic architecture] the Indian mind has taken in much from the Arab and Persian imagination…; but it remains clear enough that it is still on the whole a typically Indian creation with the peculiar Indian gift. The richness of decorative skill and imagination has been turned to the uses of another style, but it is the same skill which we find in the northern Hindu temples, and in the ground we see, however toned down, something sometimes of the old epic mass and power, but more often that lyric grace which we see developing before the Mahomedan advent in the indigenous sculpture,—as in the schools of the North-East and of Java,—and sometimes a blending of the two motives.” (Sri Aurobindo, CWSA, 12: 282-283)

A short walk from the Kamal Mahal is the building known as Elephant Stables, an elaborate, imposing structure in an immense open space and one of the few structures, which had remained, unharmed. True to its name, every single portion of the structure is colossal, like the jumbo elephant itself.

The Vijayanagara army had several hundred elephants but this building is meant to accommodate only eleven elephants. Perhaps these were imperial elephants. King Deva Raya II was a great lover of elephants. It is possible that these stables were built during his period.

Each of the eleven chambers of this stable complex has lofty arched doorways opening onto a large open space. The domes on the top are of different shapes and sizes, though there is a central symmetry.  The central (sixth) chamber has a flat roof and an open gallery, a space which was probably used by musicians and drummers. This is all the more likely because in front of this complex is an open area which was in all likelihood used as a parade ground for the imperial troops and animals.

All the domes have ornate designs on the inside. The domes on the first and the last chamber are similar, very much resembling an Islamic tomb. The central chamber’s roof structure is more temple-like; interestingly while all the roofs are intact this center one has long been collapsed or was destroyed. All the chambers are connected with small doors.

Toward the north of the elephant stables stands another building, the purpose of which remains a mystery. The raised open arcade seems to suggest that it may have served partly as a grandstand, where the mighty Vijayanagara emperors and their commanders reviewed their armed troops – men and their trusty companions from the animal world. It is believed that the open hall in the interior of this space, surrounded by a raised loggia, might have been the site of martial entertainments, such as boxing and wrestling matches.

After this quick tour of the imposing elephant stables, let us now spend some leisurely moments and cool ourselves in a more delicately designed space, known as Queen’s Bath.

Square in design with plain and simple exterior and yet surprisingly ornate interiors, this structure is believed to have been constructed during the time of King Achyuta Raya. It is called Queen’s Bath because in all likelihood this was mostly used by the Queens and other royal ladies for leisurely baths and other water sports.

The interior of this building must have been quite beautiful once upon a time, with ornate balconies, each having a set of three windows. Each of the arched bays surrounding the bath is decorated with intricately carved stucco ornamentation on the ceilings and the vaults placed above the arched bays. The pool in the middle of the building is open to sky; the depth of the pool is about 6 feet and it has stone steps leading to the bottom of the tank. 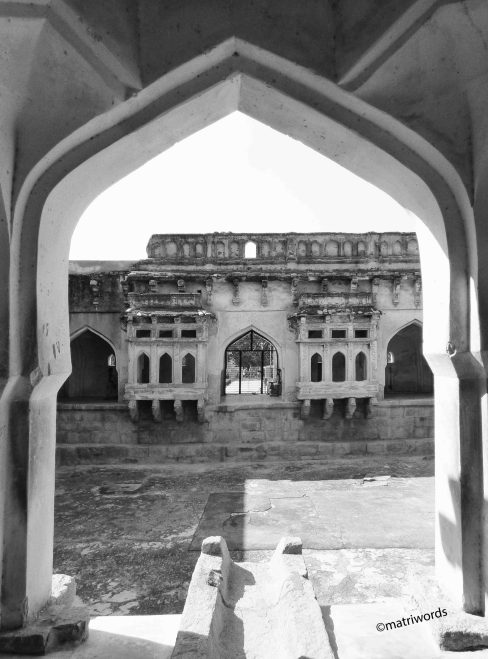 At several places the original plaster has survived the destruction by the Deccan Sultans, but it’s a pity to witness the modern graffiti on some of the walls, courtesy of some thoughtless and unconcerned tourists.

After spending some time at the Queen’s Bath and then looking at the dry and arid surroundings of the royal quarters a visitor may wonder from where and how water was brought for the pool. One might also wonder how the pool would have been occasionally emptied for cleaning and renovation works. These are some questions an engineer might be more interested in, but for a lover of art such practical concerns take backstage especially when faced with such raw and natural beauty as this.

Coming up in next part…A Bit More of Royal Enclosure

One thought on “Hampi Continues to Live – Part 9”

Radha's consciousness. Perfect attachment to the Divine.
19th January. I am reminded of a review I had written of this deeply moving book a couple of years back. I don't read much fiction but this one hardly feels like fiction. Or if it does at places, it is meant to remind the reader that truth can indeed be much harsher than fiction.
True courage
"the attitude of the fighter who, as representative of something very great, could not allow himself to be put down or belittled." (Sri Aurobindo on Swami Vivekananda)
New video on our channel. Temples of Goa - part 2. We zoom in on one of the most famous temples of Goa - Shri Manguesh Devasthan also known as Mangeshi Temple.
Prakriti to Shakti
"Neither Nature nor Destiny nor the Divine work in the mental way or by the law of the mind or according to its standards—that is why even to the scientist and the philosopher Nature, Destiny, the way of the Divine all seem a mystery." (Sri Aurobindo, CWSA, 32: 352)
Let Beauty be Your Constant Ideal
#newyear #newyear2023 #sriaurobibdoandthemother #sriaurobindo #divinemother #srimaa #sriaurobindoashrampondicherry #sriaurobindoashram #theMotherQuotes #Pondicherry
#shiva #nataraja #sriaurobindo #cosmic #mahadev🙏 #sanatanadharma #Hinduism #cosmicdance #cosmicdancer #tandava
Uncluttered simplicity.
"A stone can represent divine power, and it can also be just the visual representation of a stone! So the question of finding the immense power of symbolism in Indian culture is one thing. To be dedicated to it in a romantic way, is entirely a different thing. Now it depends on who the artists are that are working in this direction, and what they are trying to show." (S H Raza)
MAHAKALI Power of The Mother
On Sri Aurobindo's Mahasamadhi
A 270 degree projection representing various schools of miniature painting. Two key themes represented are Ramayana and Ragachitra. From the vast collection of miniatures at National Museum, New Delhi.
An offering for November 24, Siddhi Divas, which marks the anniversary of the Day of Victory, the day of the descent of Sri Krishna Consciousness or the Overmental Consciousness into the physical, which happened in the year 1926.
God by Sri Aurobindo
Watch: Sri Aurobindo on the Significance of Ramayana - https://www.youtube.com/watch?v=JOuxA52tyLo