April 24, 2020 marks the centenary of the final arrival of the Mother in Pondicherry. This marked a new phase of her work with Sri Aurobindo for the destiny of Earth and mankind. While on the outer level her return to Pondicherry marked a definitive change in the rhythm and scope of the life at Sri Aurobindo Ashram, on an inner level this event was, in the words of the Mother, “the tangible sign of the sure victory over the adverse forces.”

To mark this special occasion, Matriwords presents a special photo-feature on Dawn. In the Veda the coming of the Dawn symbolises the Truth won out of the Night of darkness.

All quotes featured here are from two works of Sri Aurobindo (The Secret of the Veda & Savitri). Photos and quotes selection by Suhas Mehra; pictures were taken at Batim Lake in Goa, Nandi Hills in Karnataka, and Kutch in Gujarat.

“Night in the Veda is the symbol of our obscure consciousness full of ignorance in knowledge and of stumblings in will and act, therefore of all evil, sin and suffering; light is the coming of the illuminated higher consciousness which leads to truth and happiness. We find constantly the opposition of the two words duritam and suvitam. Duritam means literally stumbling or wrong going, figuratively all that is wrong and evil, all sin, error, calamity; suvitam means literally right or good going and expresses all that is good and happy, it means especially the felicity that comes by following the right path. Thus Vasishtha says of the goddess [Usha] (RV, VII.78.2), “Dawn comes divine repelling by the Light all darknesses and evils,” viśvā tamāṁsi duritā and in a number of verses the goddess is described as awakening, impelling or leading men to right going, to the happiness, suvitāya.” (CWSA 30: 149) 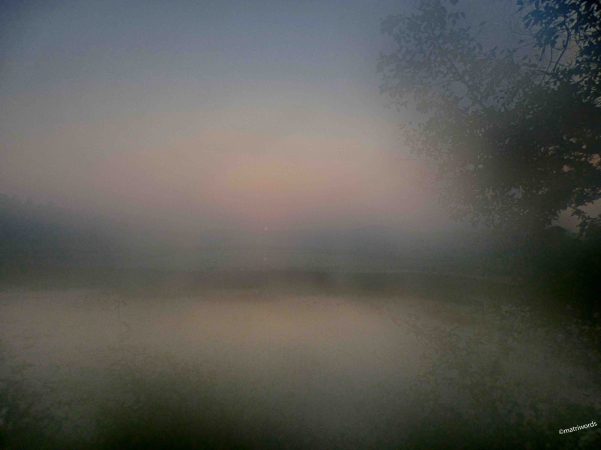 “The Dawn is the inner dawn which brings to man all the varied fullnesses of his widest being, force, consciousness, joy; it is radiant with its illuminations, it is accompanied by all possible powers and energies, it gives man the full force of vitality so that he can enjoy the infinite delight of that vaster existence.” (CWSA 15: 136) 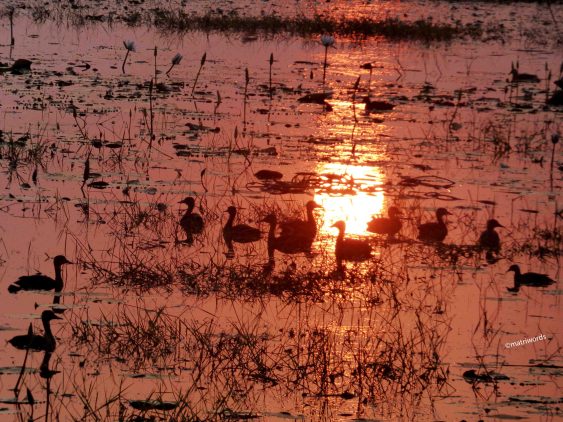 A glamour from unreached transcendences
Iridescent with the glory of the Unseen,
A message from the unknown immortal Light
Ablaze upon creation’s quivering edge,
Dawn built her aura of magnificent hues
And buried its seed of grandeur in the hours. (CWSA 33: 3-4) 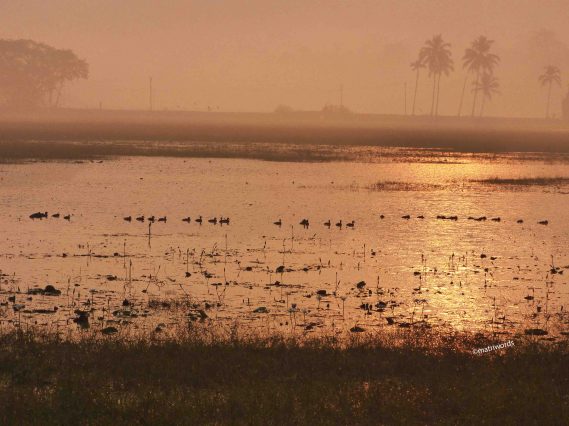 “…everywhere [in the Veda] Dawn comes as a bringer of the Truth, is herself the outshining of the Truth. She is the divine Dawn and the physical dawning is only her shadow and symbol in the material universe.” (CWSA 15:130)

“Confirm in us a state of bliss full of light, of conquering energy and of force of vitality.” (CWSA 15: 124) 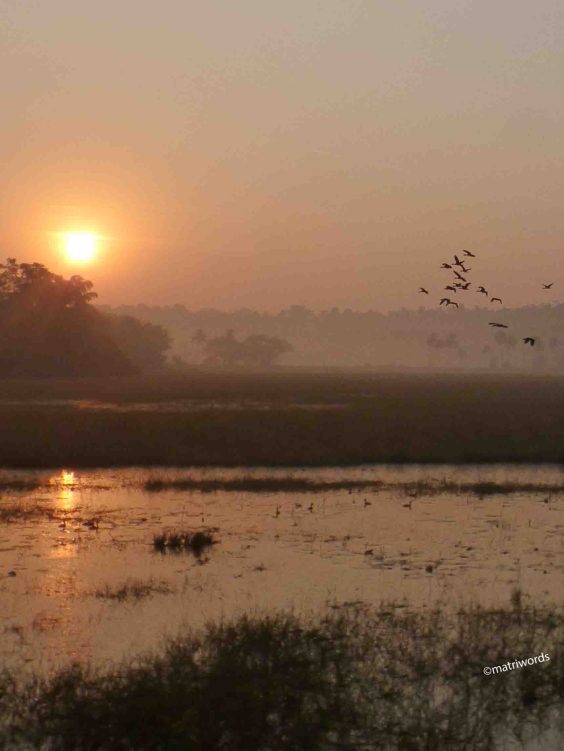 “…the illumining dawn of the higher or undivided Consciousness is always the dawn of the Truth” (CWSA 15: 131) 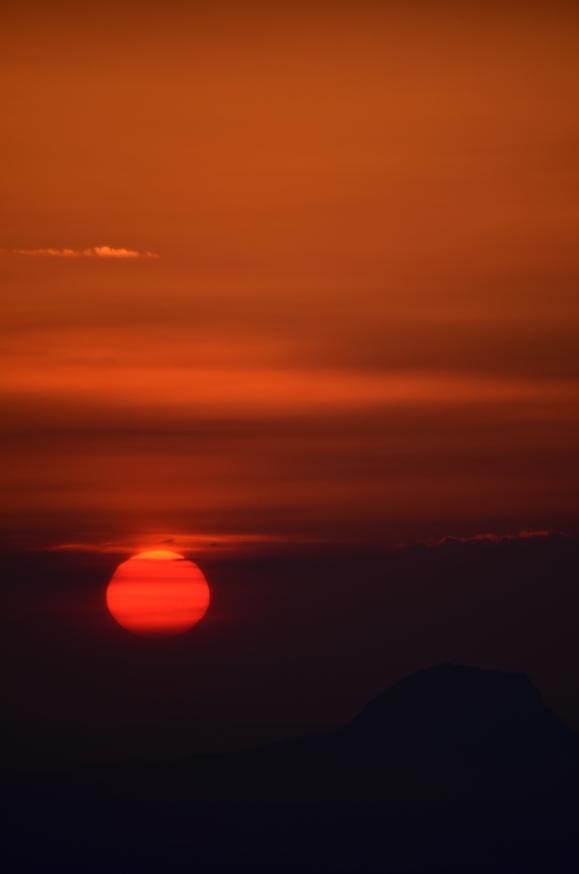 “Our fathers found out the hidden light, by the truth in their thoughts they brought to birth the Dawn…” (CWSA 15: 128)

“The Night is clearly the image of an inner darkness; by the coming of the Dawn the Truths are won out of the Nights. This is the rising of the Sun which was lost in the obscurity—the familiar figure of the lost sun recovered by the Gods and the Angirasa Rishis—the sun of Truth and it now shoots out its tongue of fire towards the golden Light:—for hiraṇya, gold is the concrete symbol of the higher light, the gold of the Truth, and it is this treasure not golden coin for which the Vedic Rishis pray to the Gods. This great change from the inner obscuration to the illumination is effected by the Ashwins, lords of the joyous upward action of the mind and the vital powers, through the immortal wine of the Ananda poured into mind and body and there drunk by them. They mentalise the expressive Word, they lead us into the heaven of pure mind beyond this darkness and there by the Thought they set the powers of the Delight to work. But even over the heavenly waters they cross, for the power of the Soma helps them to dissolve all mental constructions, and they cast aside even this veil; they go beyond Mind and the last attaining is described as the crossing of the rivers, the passage through the heaven of the pure mind, the journey by the path of the Truth to the other side. Not till we reach the highest supreme, paramā parāvat, do we rest at last from the great human journey.” (CWSA 15: 130)

“Dawn born in heaven opens out things by the Truth, she comes manifesting the greatness.” (CWSA 15: 132) 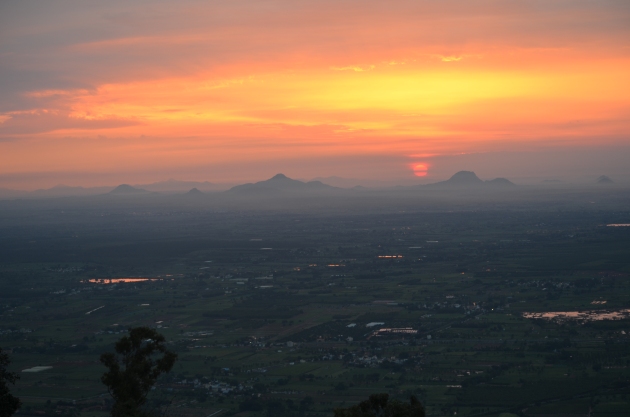 “Usha, the dawn of the illumination of the Truth, must necessarily bring also the joy and the beatitude. This idea of the Dawn as the bringer of delight we find constantly in the Veda and Vasishtha gives a very positive expression to it in [RV] VII.81.3, yā vahasi puru spārhaṁ ratnaṁ na dāśuṣe mayaḥ, “thou who bearest to the giver the beatitude as a manifold and desirable ecstasy.”” (CWSA 15: 133) 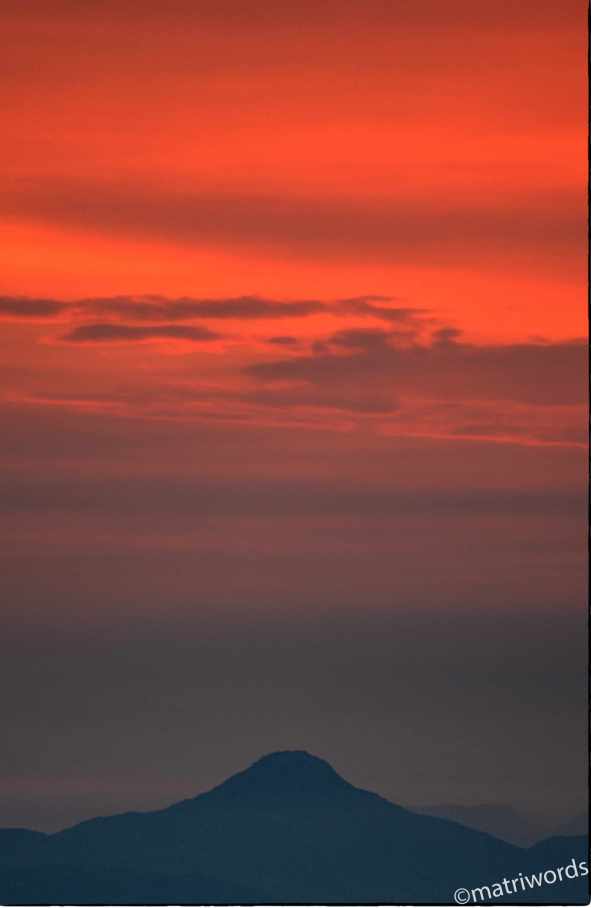 “Throughout the Veda Usha, daughter of Heaven… is the medium of the awakening, the activity and the growth of the other gods; she is the first condition of the Vedic realisation. By her increasing illumination the whole nature of man is clarified; through her he arrives at the Truth, through her he enjoys the Beatitude. The divine dawn of the Rishis is the advent of the divine Light throwing off veil after veil and revealing in man’s activities the luminous godhead. In that light the Work is done, the sacrifice offered and its desirable fruits gathered by humanity.” (CWSA 15: 295)

“…she [Usha] is the leader not only of happy truths, but of our spiritual wealth and joy, bringer of the felicity which is reached by man or brought to him by the Truth, eṣā netrī rādhasaḥ sūnṛtānām (RV, VII.76.7)” (CWSA 15: 135)

“The Dawn is the inner dawn which brings to man all the varied fullnesses of his widest being, force, consciousness, joy; it is radiant with its illuminations, it is accompanied by all possible powers and energies, it gives man the full force of vitality so that he can enjoy the infinite delight of that vaster existence.” (CWSA 15: 136)

“Dawn divine is the coming of the Godhead. She is the light of the Truth and the Felicity pouring on us from the Lord of Wisdom and Bliss, amṛtasya ketuḥ, svasarasya patnī. (RV, III.61.3)” (CWSA 15: 298) 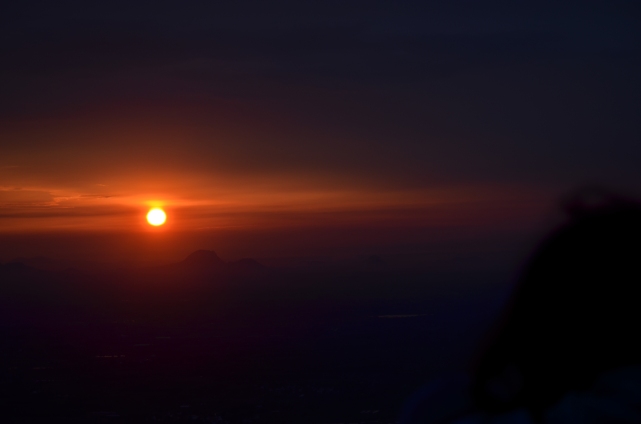 Dawn of the luminous journey, Dawn queen of truth, large with the Truth, how wide is the gleam from her rosy limbs, —Dawn divine who brings with her the heaven of light! Her the seers adore with their thoughts. (RV, V.80.1)

2) This is she who has the vision and she awakens man and makes his paths easy to travel and walks in his front. How large is her chariot, how vast and all-pervading the goddess, how she brings Light in the front of the days! (RV, V.80.2)
(CWSA, 15: 553) 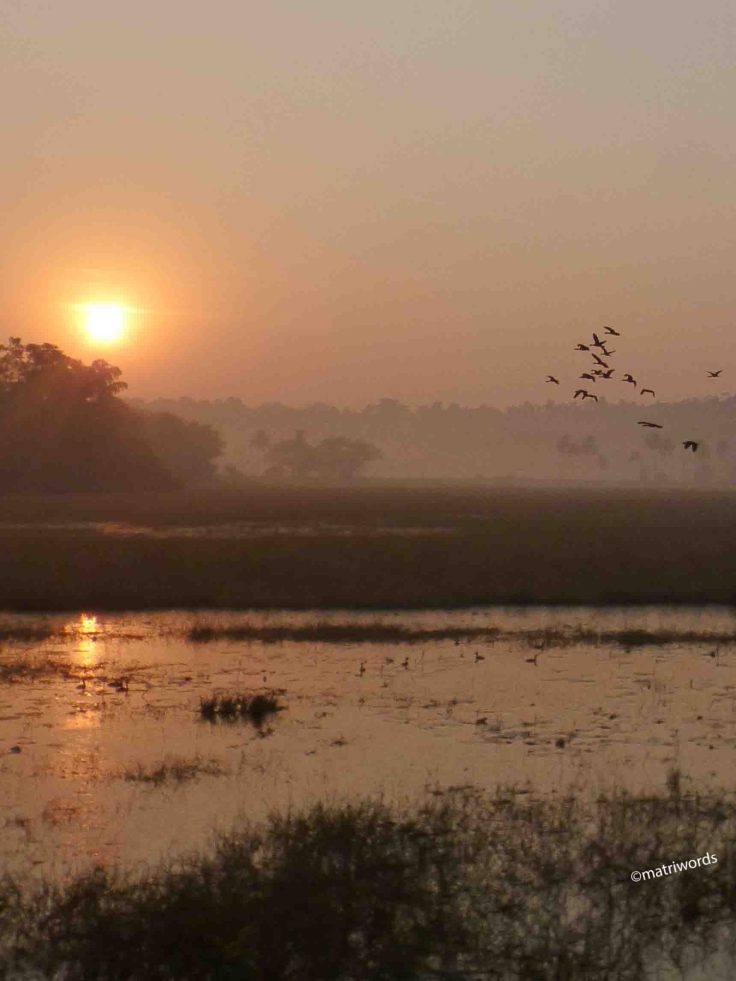 To see more photo-features on this blog, click HERE.

Hymn to Durga by Sri Aurobindo
A Tree' is a beautiful short poem written by Sri Aurobindo sometime between 1900-1906. It speaks of the eternal human condition -- bound to earth yet seeking for skies above...
Let us visit a highly unique temple in Goa. Devaki Krishna Ravalnath temple, located at Marcel in Goa, is said to be the only temple in India where Krishna is worshipped with his birth mother Devaki. Read about it here: https://matriwords.com/2020/08/11/devaki-and-krishna-in-goa/
Watch our latest video 'The One Self (a sonnet by Sri Aurobindo)
Three flower stories...
Watch our video: https://www.youtube.com/watch?v=JOuxA52tyLo
“[Rāma’s] business was to destroy Ravana and to establish the Ramarajya – in other words, to fix for the future the possibility of an order proper to the sattwic civilised human being who governs his life by the reason, the finer emotions, morality, or at least moral ideals, such as truth, obedience, co-operation and harmony, the sense of domestic and public order, – to establish this in a world still occupied by anarchic forces, the Animal mind and the powers of the vital Ego making its own satisfaction the rule of life, in other words, the Vanara and Rakshasa. . . .
Today is 112th anniversary of Sri Aurobindo's arrival in Pondicherry.
At Shankar Chetty's house, today. This was Sri Aurobindo's first residence in Pondicherry when he arrived on April 4, 1910.
Avoid useless talking. Also useless talking on social media.
Goa beyond the beaches, parties and churches! The new matriwords video, Temples of Goa - a brief look, is a humble attempt to tell the story of most of the Hindu temples we visited in Goa. It is dedicated to the brave Hindus who risked their lives to save their gods during the 400+ year Portuguese colonial rule from 1510 onwards which was a brutal period for Hindus of that region.
"The power that governs the world is at least as wise as you and it is not absolutely necessary that you should be consulted or indulged in its management; God is seeing to it." (Sri Aurobindo, CWSA, 13: 79)
The ego thinks of what it wants and has not. This is its constant preoccupation. The soul is aware of what it is given and lives in endless gratitude.
"Art can express eternal truth, it is not limited to the expression of form and appearance. So wonderfully has God made the world that a man using a simple combination of lines, an unpretentious harmony of colours, can raise this apparently insignificant medium to suggest absolute and profound truths with a perfection which language labours with difficulty to reach. What Nature is, what God is, what man is can be triumphantly revealed in stone or on canvas."
Open to Her Force....
A humble offering on the Mother's 144th birthday
Memories...
The word for the road!